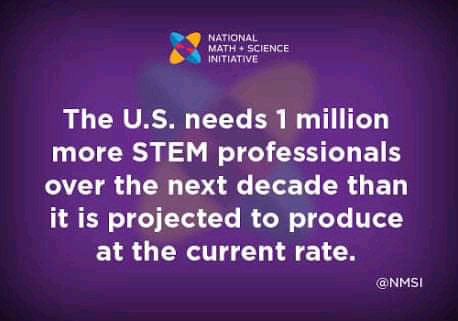 STEM Careers On The Rise,

For almost two decades now, the STEMWorkspace have expanded to accommodate many more STEM-related jobs, especially in the digital field. For instance, more than 17.3 million workers within the age of 25 and above were employed in STEM fields in the United States in 2016 alone. However, that figure only constituted a mere 13% of the total 131.3 million of American workforce.

Also, employment in STEMFields soared by 16.5% between November 2013 and that of 2018. That growth rate is approximately 5 times bigger than the 9.8% of non-STEM jobs. And this statistics leaves us with the conclusion that STEM jobs are rising very quickly, more quicker than the ones in non-STEM fields.

Infact, about 75% of the fastest growing jobs in the United States workspace today are in so much need of STEMSkills. And in terms of income margin, STEM workers also earn about 26% more than those in the non-STEM fields. That’s a lot of financial gap in about 10 to 20 years of working.

But what jobs will be most sought for as STEM continues to expand its influence in the job market?

Due to the disruptive impact of the 4thindustrialrevolution now sweeping across the global workspace, experts project that many jobs, both existing and new, will be in great demand in the next 10 years, and some of them are:

As disruptive technologies like Robotics and ArtificialIntelligence continue to automate jobs at a rapid pace, experts now fear that many formerly traditional jobs will disappear from the job market in the next 10 years. Here are few of them:

Contrary to Tech critics, these projections are actually true and realistic. They give us a window picture of what the global workspace will look like in the next two decades. Between 2003 and 2010, STEM-related jobs grew by 3 times higher in number than non-STEM jobs, totalling all available STEMJobs in 2018 to 2.4 million.

Without any more doubts, the fact remains that careers in STEM are on a sharp rise today, and only those who have STEM skills will be able to secure